Back on July 9, LeBron got his fifteen minutes of fame on this blog. His return to Cleveland last night = a SLAM DUNK for LeBron and the Miami Heat! The DAMN SKUNK (if you ask any Cleveland fan) had 38 points and was fired up by the boos.
See the before and after footage here.

There was a hockey equivalent in Ottawa with Dany Heatley's return.
Two videos here. The second one has Ottawa fans throwing their
Heatley jerseys on the ice! It wasn't because he got a hat trick either...
BUT Sydney Crosby had a natural hat trick (his first ever) last night
- his second three-goal game in a three-game span.

You may burn LeBron or Heatley jerseys BUT respect these please: 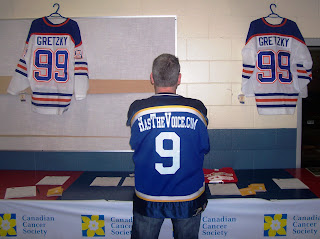 My Facebook status late yesterday afternoon: Hockey Night in Canada is showing Montreal vs Toronto in 3D on Dec. 11. Since the Leafs won a Cup in '67, they have lost in black and white, color, high def - and soon 3D:)

Late Wednesday status: Declared it Basketball Thursday with LeBron returning to Cleveland; my son, Jordan, playing his first game on the Senior Boys team; and myself on the court at 9:15 pm...Just Do It!
Posted by Ralph Michael Hass at 8:56 am