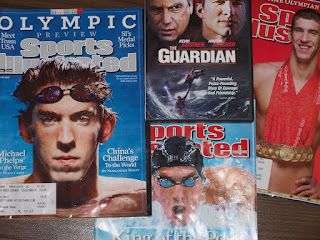 Michael Phelps has been everywhere it seems after starring at the Olympics. Tonight, he will be on the season premiere of "Saturday Night Live." That means "The Thurman Thomas Show" (with voiceover work by yours truly) will have some competition on 3 of our 6 affiliate stations. Check out the TV listings here. The Buffalo Bills had an amazing first week game against the Seattle Seahawks winning 34-10. Here is some of my game recap.

Maybe this TV gig for Mikey will lead to a movie career? If I were his agent, I would try and get him opposite Ashton Kutcher in a sequel to "The Guardian." And, since it is my friend Tom Dheere's birthday today, I would cast him to replace Kevin Costner. That guy is 53 now...Tom is probably only half that:)
Posted by Ralph Michael Hass at 1:55 pm 1 comment:

I consider myself very lucky to be part of the voiceover community. My voiceover colleagues are caring, encouraging and talented.

It was about this time yesterday that I learned of the unfortunate passing at the age of 68 of THE voiceover king, Don LaFontaine, through Stephanie's heartfelt post at the Voices.com blog. Many people like myself left a comment because Don LaFontaine made an impact in our lives and careers. He also made time for folks again and again.

Bob Souer has linked to many voiceover blogs that paid tribute to Don today. Take time to have a look - and even a listen - to THE voice of the late great Don LaFontaine.
Posted by Ralph Michael Hass at 9:54 pm 1 comment: