I ended last month by giving a shout-out to basketballers Nate Robinson, Nate "Tiny" Archibald and Steve Nash on Nate and Nash are GREAT!

Let's end this month by reuniting Nash and Robinson for a charity soccer game in New York:


Who was Steve Nash cheering for at the World Cup?
You'll see when you click below.
Warning! Beware of anyone with Eagle in their nickname...

In the sports world, Canadian power is more prevalent in the hockey realm than on the baseball diamond or soccer pitch. We didn't even qualify for the World Cup going on right now in South Africa but Toronto-born Joey Votto of the Cincinnati Reds hit his 16th home run today! The Toronto Blue Jays have actually hit more home runs than any other baseball team this season though: 115 compared to Boston's 103.

The Buffalo Sabres went crazy for Canada at this weekend's NHL Draft! Three of the team's top four picks were from the Western Hockey League while eight of their nine overall draft picks were from north of the border. Congratulations also to the NHL Rookie of the Year from Buffalo: Tyler Myers!

If you were wondering who the next Rookie of the Year could be, have a look at this list: 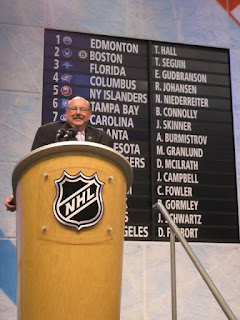 The first three names (Taylor Hall, Tyler Seguin and Eric Gudbranson) all played in the Ontario Hockey League while the next three players (Ryan Johansen, Nino Niederreiter and Brett Connolly) all played in the Western Hockey League. Here is A look at the Entry Draft by the numbers.
Talk about another catch-22 situation (like I did last week): 22 Americans (including Canadian-born dual citizen Cam Fowler, who plays for Team USA) were selected in the first two rounds of the draft. They were born in 11 states, and 11 Americans were taken in each of the first two rounds.
Calling out their names at the draft in Los Angeles was the gentleman above: David Courtney. David and I are Facebook friends and he certainly found his niche announcing for sports teams and events. He is up to 21 years for the NHL's LA Kings, 16 with baseball's Los Angeles Angels and two for the LA Clippers. But David has something much more important coming up in his future - marrying his fiancee, Janet. ALL the best David and Janet! I'll leave you with a couple of David Courtney's favorite quotes. These are originals:
"Ladies and Gentlemen, good evening and welcome to Staples Center/Angel Stadium..."
"Nothing is impossible... until you try it yourself. Then, have Google handy."
Posted by Ralph Michael Hass at 5:21 pm No comments:

Some voice talents publish their Twitter feeds on their blogs. The classy CourVO had a quick one today while the last Twitter update I was able to track down for Dave was for May 28. Karen Commins covers a week at a time. Here are:
Twitter updates from Karen for the week preceeding Mon Jun 21, 2010.
They both provide quick links to articles, interviews and videos. Cool!

Anyway, a BIG thank you should be extended to Dave Courvoisier and Terry Daniel for the new SocialMediaVO website launched in Los Angeles recently at the VOICE 2010 conference. It is:

Social Media...by voice actors, for voice actors.
Lots to explore and build your voice over business!
So, NO Twitter updates from me. But how about Friday Facebook FUN?
We'll do this once in a while...
Only time will tell if yours truly has started a new social media trend known as Friday Facebook FUN...THANKS for stopping by!
Posted by Ralph Michael Hass at 4:53 pm 2 comments: 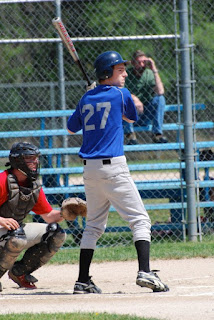 Justin is playing summer ball (Midget AA) and I am predicting a provincial title in early August for Rutland!
A great #27 retired today in the NHL: Scott Niedermayer. He led the Cranbrook (another cool place in beautiful British Columbia!) AAA Midgets with 55 goals and 92 points in 1989. He had 14 goals and 69 points as a rookie with the 1989-90 Kamloops Blazers to help them into the Memorial Cup.  Great Scott is the only hockey player in the world to win the Stanley Cup (4 in fact!), Olympic gold, the World Championship, World Junior Championship, the World Cup and the Memorial Cup. Scott Niedermayer is a shoo-in for the Hall of Fame!
Hockey Hall calls 1st women, Ciccarelli has nothing to do with
prolific voiceover blogger Stephanie Ciccarelli BUT mentions two ladies (Angela James and Cammi Granato) who will be the first to go into the Hockey Hall of Fame on November 8 along with Dino Ciccarelli. Stephanie will be a guest blogger here in the next few days.
You don't want to miss her article!
Posted by Ralph Michael Hass at 7:58 pm No comments:

Chicago won the Stanley Cup in overtime this past Wednesday!
Congrats to Buffalo boy, Patrick Kane, for scoring in overtime!
The goal was assisted by former Buffalo Sabre, Brian Campbell. 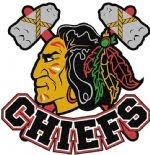 There is a new hockey team coming to Kelowna and you have to love their logo! I will be doing the Public Address announcing for the team. If you would like to be involved with the team in one way or another, please visit the Kelowna Chiefs website.
So, CHIcago and the CHIefs have been mentioned...CHI CHI...
Other CHI CHI's you may be familiar with include:
- tropical frozen cocktail
- a popular Mexican restaurant chain from 1975 to 2004 co-founded by former Green Bay Packers player Max McGee.
- an anime character in the "Dragon Ball" series
- the golfer: Chi Chi Rodriguez.
He was robbed inside his home in Puerto Rico last month.
Here are three Chi Chi quotes for you to enjoy:
"The sweetest two words are 'next time.' The sourest word is 'if.'
“I don't exaggerate - I just remember big.”
"I'm getting so old, I don't even buy green bananas anymore."
Posted by Ralph Michael Hass at 11:16 am No comments:

Today I heard 'Til Tuesday's "Voices Carry" coming out of the supermarket. This is a classic from 1985. The band was from Boston. I hope the Celtics beat the Lakers tonight in the pivotal game three of the NBA Finals! By the way, I think basketball coaches lose their voices quicker than coaches in any other sport...

For those of you that love the NHL's "History Will Be Made" ad campaign, you can snag the music here. Here is the channel with 47 commercials and counting.

Here is a guy you may recognize for doing a lot of great commercials...played basketball pretty well too:)

Posted by Ralph Michael Hass at 2:46 pm No comments:

RIP John Wooden. "Make each day a masterpiece. Help others."

Yesterday, arguably the greatest coach of all-time in ANY sport died.
John Wooden was 99 years old and coached basketball for 27 seasons at U.C.L.A. Here is a detailed article from the New York Times. He always carried a piece of paper with a message from his father that read:
“Be true to yourself. Make each day a masterpiece. Help others. Drink deeply from good books. Make friendship a fine art. Build a shelter against a rainy day.”

Enjoy the voice and wisdom of John Wooden below. The end of the interview has him mention three simple rules for his players, which I believe are important in our daily walk as well:
What do these rules have in common? Respect. That is something I would like to see more of in this world. David Goad sums it up well on his blog. A friend said something this week which tied in with the last point:
Accept people. Don't expect things from people.

Coach John Wooden's website is filled with encouragement.
Pay a visit when you get a chance.
Posted by Ralph Michael Hass at 5:38 pm No comments:

I wonder if Kevin Garnett and the Boston Celtics will knock out Kobe Bryant and the LA Lakers in the NBA finals starting tonight? I am hoping they do!

Both those legends started their careers right out of high school. Garnett graduated in Chicago while Bryant graduated a year later in 1996 in Philadelphia. Is it just a coincidence that those cities are currently battling for the Stanley Cup in the NHL? Growing up in South Carolina, Kevin Garnett was a fan of the Los Angeles Lakers and lists former Laker Magic Johnson and Dallas Cowboy Tony Dorsett as his sports heroes.

A little more food for thought:
Kobe's parents named him after a type of steak (kobe) seen on a restaurant menu prior to his birth. "Jelly Bean" was his dad's nickname. Joe Bryant averaged 8.7 points per game in 606 career games in the NBA. Kevin Garnett's favorite foods are hamburgers, french fries and pizza.
Posted by Ralph Michael Hass at 2:31 pm No comments: