The Washington Capitals came into Buffalo last night and won 4-2. On Boxing Day, the Caps edged us as well, 3-2, thanks to another highlight reel goal from Ovechkin. I guess that was to be expected since we referred to the "amazing Alex" in the opener on MSG-TV. That script and an article on yours truly was featured on THE Washington Capitals blog known as "On Frozen Blog." Thanks to my voiceover colleague and friend, Gary Kriebel (aka Gustafsson at OFB), for the plug! I have thrown the spotlight on Gary here a couple of times before.

I mentioned in my last post about Trevor Linden's number 16 being raised to the rafters at Vancouver's GM Place. Well, Washington retired number 11 recently and Gary was there to provide some awesome visual evidence. Mike Gartner is the player in question and he is actually my best player on my current WhatIfSports.com fantasy hockey team.

DC (David Ciccarelli) came calling yesterday in the form of an email letting me know about "The Report on the Voice Over Industry 2009." DC is the CEO and President at Voices.com. I know it will be very informative and educational to read...I'll get to it in 2009 David:)
Happy New Year everyone!
Posted by Ralph Michael Hass at 8:08 pm No comments: TLC is an abbreviation for many things. The most popular would be Tender Loving Care and The Learning Channel. How about That Lazy Cat?
This is ours, Bunzo, looking out the front window yesterday at the basketball hoop surrounded by snow. Yes, it is certainly hockey weather! Last night at GM Place in Vancouver they retired the number 16 jersey of Trevor Linden.
TLC
You will see what I mean for the last one 82 seconds into the Trevor Linden tribute video that played on the GM Place scoreclock prior to the jersey ceremony yesterday. Thanks a LOT for Caring Trevor!
Posted by Ralph Michael Hass at 6:08 pm No comments: 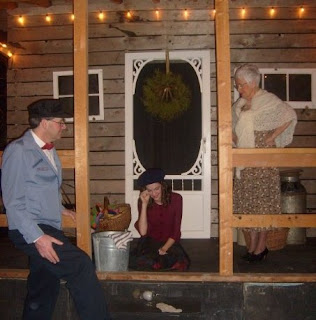 This weekend, "The Day The Earth Stood Still" is the big movie release in theatres. Last weekend it was "Three Days That Ralph Stood Still" at Willow Park Church's annual "Living Nativity."
I was the milkman mannequin.
No voiceovers allowed!

Today I came across this crime north of us: Thieves break in, drink milk.

To the east of us one province over is Alberta. Further east is Saskatchewan. Medicine Hat is on the Alberta side of the border.
To the south is Montana. Little Plume Church in Medicine Hat is running this ad featuring yours truly promoting a Christmas event tomorrow.

The Medicine Hat Tigers junior hockey team is here in Kelowna on January 30 next month. I am hoping to attend that game. The Tigers
are a plus 10 in the win column right now and the Kelowna Rockets are an impressive plus 7. Tyler Myers of Kelowna was the Sabres' first pick in the NHL draft this year - 12th overall. Tyler Ennis of Medicine Hat was the Sabres' second first round pick at #26.

One of Medicine Hat's hometown heroes is Trevor Linden. He played his junior hockey there and had a great NHL career! In four short days the Vancouver Canucks will be retiring Linden's #16. Thanks for the memories Trevor - and being a great role model for the kids!
Posted by Ralph Michael Hass at 2:30 pm No comments: