Yesterday, our son, Justin, and a friend drove down to Vancouver to see his favorite team - the LA Kings! It was his first NHL game and it was NOT the road team's finest effort - losing 6-2.

My team, the Sabres, are in Vancouver tomorrow night after last night's 5-0 shutout win in Edmonton! On Monday, the Sabres won another in Alberta - beating Calgary, 2-1, in overtime.

I noticed last night at the first stoppage of play in Vancouver that they played Tom Petty's "Runnin' Down A Dream." Tied in nicely with the banner on Justin's car! 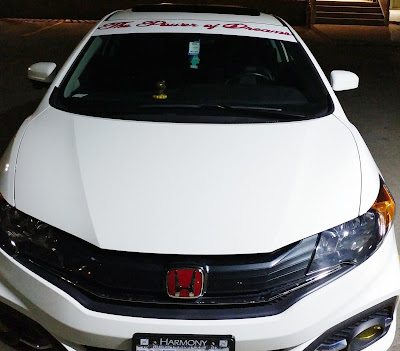 Justin's younger brother, Jordan, has a license plate that is a nice reminder of Martin Luther King Jr. Day on January 15th. 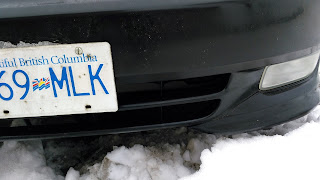 Martin Luther King, Jr. Quote: I have a dream that one day this nation will rise up and live out the true meaning of its creed; We hold these truths to be self-evident: that all men are created equal.

I once had a cool license plate that started with NHL in the late '80's when I worked in radio. But unfortunately they were stolen while I was doing a shift. As I recall my next license plate wasn't as cool with NRD.

My wife has an interest in license plates. Here is the story that has inspired me and many others:

#Icestagram on the bottom of my wife's car's license plate. By the way, she takes note of the expiry dates when she sees #LicensePlates during her daily travels. If the expiry date matches a family member or friend's birthday, they get prayed for. If Darlene (my wife of 29 years) sees someone's birthdate three times in one day, my wife will make a point of contacting them personally to see how they are doing. It's a unique prayer ministry that I also do. #PowerOfPrayer
A post shared by RalphH_VO (@ralphhass_vo) on Jan 13, 2018 at 4:43pm PST

Posted by Ralph Michael Hass at 5:02 pm No comments: