Clicking on that link will take you back seven years on this blog and look at NHL players who wore that number. One below has played his last game as a Vancouver Canuck and he left quite a legacy!

You slayed the dragon, shot arrows to the heavens and never backed down. Thank you Burr. pic.twitter.com/ky47j9fDtR
— Vancouver Canucks (@Canucks) February 27, 2017

THANK YOU @aburr14 for everything you've done for the kids & families of BC over the last 12 years! We will miss you! #Canucks pic.twitter.com/yeGEiQcX67
— Canucks For Kids (@Canucksforkids) February 27, 2017

Number 53, Bo Horvat, currently leads the Canucks  in scoring and could finish the year with 53 points if you average it all out. 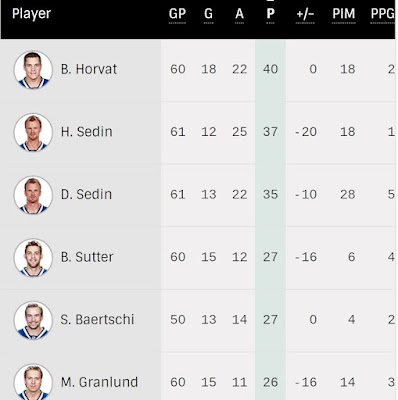 .@BoHorvat talks about what he learned from Alex Burrows and how he wants to step up and be a leader on and off the ice. pic.twitter.com/IsAF3rPcRt
— Vancouver Canucks (@Canucks) February 28, 2017