MY political career/Pittsburgh is MY Super Bowl pick 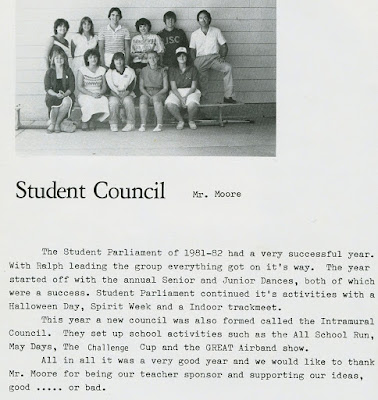 It was a long time ago that I held political office...
I'm the tall guy in the back row...
Sitting behind me at last Wednesday's Rockets game was one of my former teachers, Ms. Mickey Patryluk. She said she would have never recognized me had I not said hello. She remained at OKM until she retired in 1999 and is currently the President of the BC Liberal Party.
I am predicting Pittsburgh and the "burger boys" will win Super Bowl 43 on Sunday:
Steelers' quarterback Ben Roethlisberger and British Columbia born punter, Mitch Berger.
Posted by Ralph Michael Hass at 4:21 pm No comments:

Moments ago I launched the Buffalo Sabres' broadcast on MSG-TV with a script that went like this:
IT HAS ALREADY BEEN A DRAMATIC WEEK FOR OUR COUNTRY....
(INAUGURATION FOOTAGE)
AND THE SABRES ARE KEEPING WITH THE THEME!
(RICK JEANNERET'S CALL OF SHOOTOUT WIN MONDAY VS FLORIDA)
BUFFALO HAS RESPONDED TO LINDY’S CALL FOR CHANGE...
AND AS THE SABRES TOUR NORTH AMERICA OVER THE NEXT
TWO WEEKS THEY’LL TRY TO KEEP CLIMBING IN THE POLLS.
TONIGHT...TAMPA BAY.
SABRES....LIGHTNING...NEXT ON MSG!

Unfortunately Tampa is up 2-0 after the first period! I won't have another Sabres opener to voice until February 4 as the All-Star Game is in Montreal this weekend and then MSG-TV is not broadcasting the west coast swing of four games between January 27 and February 2. In the meantime, my other amazing hockey client, Shaw-TV, has 6 broadcasts in that span beginning tonight in Kelowna and finishing February 3rd in Calgary. Grant Wilkins is the producer of the Shaw broadcasts from Vancouver and is battling the flu tonight. Tonight's game on Shaw-TV was promoted like this:
WHL Hockey is live on Shaw… Catch the N-H-L stars of tomorrow today… The Western Hockey League… building the world’s finest talent…Watch, Wednesday, January 21st when the Vancouver Giants and Kelowna Rockets duke it out with B-C bragging rights on the line…
WHL Hockey… only on Shaw…

I really liked Grant's script that I voiced a week ago for Shaw's upcoming March 3rd broadcast. The middle part was mmm, mmm good:
Watch, Tuesday, March 3rd when the Moose Jaw Warriors look to avoid the menacing bite of the Medicine Hat Tigers.

Here is a recent Mitsubishi Motors TV commercial I voiced.
I hope you think it is varoommm, varoommm good...

This week I had the chance to stick up (pun intended) for the Western Hockey League on a very motivating voiceover/hockey post by Jeffrey Kafer. Inspiring words Jeff!

One of the best leaders in the NHL is Jarome Iginla. He has a lot in common with President Obama and you can read it about here in a column by Hall of Fame writer Eric Duhatschek.
Posted by Ralph Michael Hass at 1:48 pm No comments:

My voiceover for tomorrow night's game in Tampa Bay will include inauguration footage! I will publish the script tomorrow but I need to be a Sabre secret agent man until it runs on MSG-TV. Did you know when you take the initials of the leaders of our countries:
Barack
Obama
Stephen
Harper
BOSH is spelled out. Yay for Raptor Chris Bosh! I wrote about him quite a bit early last year. We are all hoping President Obama gets through all the "hoops" ahead of him over the next four years. Yes We Can is the name of this video from NBA-TV.

My last blog post was on the day I went to a Kelowna Rockets game. They lost 5-2 to Moose Jaw and Kelowna's best player was a kid who had just turned sixteen. Shane McColgan of Manhattan Beach, California will be a skill player fans here will enjoy watching for several more years. Tomorrow night I'll be at another Rockets game as the mighty Vancouver Giants come to town. Their professional counterparts, the Canucks, are really struggling. They have lost six in a row on home ice. Former Sabre, Steve Bernier, has 11 goals so far for the Canucks. He goes against another one of his former teams, the San Jose Sharks, tonight. Bernier's nickname is Big Bear and I will leave you with some hockey footage with skating bears...
Posted by Ralph Michael Hass at 2:49 pm No comments:

Kelowna's first baby of the New Year was Linden Anthony Tancek. He was born at our hospital New Year's Day at 6.42 am to Mom Laurie and Dad Jeff. Yes, Linden was named after recently retired Canuck, Trevor.

Detroit defeated Chicago 6-4 in the New Year's Day NHL Winter Classic. The ratings on NBC were excellent! Maybe another Detroit team, the Lions, could improve their game by playing on ice instead of a football field?
Here is the tribute for a winless team.
The true meaning of 'team' was captured in this feature on NBC-TV between the first two periods of the Winter Classic game. Dale Tallon is the Chicago Blackhawks general manager. In the 1970 NHL Amateur Draft he was the first ever player drafted by the Vancouver Canucks. Tallon was number two overall while the Buffalo Sabres nabbed Gilbert Perreault at number one. Perreault went on to a Hall of Fame career with the Sabres and is still involved as a Corporate/Community Relations Liason. He is more than 500 points ahead of anyone else in Sabres history.
The Sabres had an early game today and beat the top team in the league, the Boston Bruins, 4-2. It was the first home loss for the Bruins since October 23. Matt Ellis was the unlikely hero of the game for the Sabres and he is featured this week on "The Sabres Show." If you want to hear me do the intro, you have to wait 1:10 seconds:)
Also with an early game today and their first ever Bowl appearance were the University at Buffalo Bulls. UConn came back to win the International Bowl game 38-20. The Bulls were recently at a Sabres game and here is that football footage from "The Sabres Show."
Posted by Ralph Michael Hass at 1:34 pm No comments: