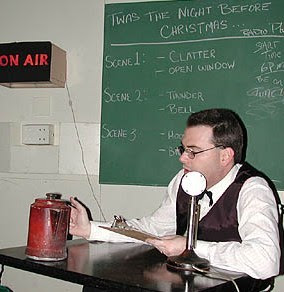 Here I am a few years ago on the set as a mannequin for "Living Nativity" - our church's popular annual gift to the community.
I used to be in radio - but NOT that long ago...
Following up on my previous post, here is the before and after footage of Buffalo's own Patrick Kane leaving a memorable mark in his hometown.
Sabre Claws - We have won 6 straight and go for 7 in a row on Boxing Day versus our best rivals: Ottawa. Santa Claus does not want to miss this one! When we played Ottawa last month for the first time this season, my opening on MSG-TV had a dramatic movie trailer feel.

I wish you all a very Merry Christmas!

I know that is what is in store for me. I feel every Christmas gets better because you have more memories to cherish.

Posted by Ralph Michael Hass at 12:34 pm No comments:

My Sabres opener started off like this last night on MSG-TV:
THE SABRES MADE THEIR POINT WEDNESDAY...
SCORING SEVERAL FROM THE POINT...TO NET TWO POINTS IN THE STANDINGS.
NOW...CAN THEY GET TWO IN A ROW?
(For sure! We won Friday night 5-3 against Washington - one of just 4 games on a Friday night).

Tonight will be extra special in Buffalo as homegrown talent Patrick Kane comes to visit with the Chicago Blackhawks. He grew up
about 6 miles from the Sabres' HSBC Arena and is now producing at a point-a-game pace after being selected Number 1 in the NHL draft in June.

Can you say Rookie Of The Year? For sure!
Here is the list of rookie winners over the years. Chicago hasn't had a Rookie Of The Year since goalie Ed Bel4444 in 1990/91. It has been even longer for the Sabres: goalie Tom Barrasso won in '83/84 - a year after Chicago's Steve Larmer and a year before the legendary Mario Lemieux. This week Barrasso was promoted to goalie coach of the Carolina Hurricanes. They lost 4-3 to Calgary last night - their third straight loss...so sorry HurriCANES - NOT:)

Hey, with Christmas coming don't forget to share a candy cane...
Posted by Ralph Michael Hass at 12:51 am 1 comment:

My Sabres opener last night on MSG-TV went like this:
It seems like forever ago...and the Sabres would like to forget it even happened. The Islanders return to Buffalo for the first time since the season opener. (They won that one 6- 4; we won last night 5-3!)

Don't be fooled by the above! I am not a home handyman...

Plenty of great advice for homeowners at this site though: Hometips. Guy Kawasaki's blog had a cool story on the company and their success with Google Adsense. Guy's post ended with these words of advice that can be applied to those of us in voiceover: Do what you love, focus on a niche, find a viable business model, and work for yourself.

Create something great, sow fields (not window boxes), “let a hundred flowers blossom,” and pray that “regular folks” will spread the word.

Posted by Ralph Michael Hass at 12:40 pm No comments:

The Sabres lost 4-1 last night to the Ducks and the two guys I slammed in my last blog post were the first (Todd Bertuzzi) and third (Chris Pronger) stars of the game. Ooops...

The first shutout in Sabres history happened on this very date in 1970. Thank you Roger Crozier! It was a 1-0 win against the Minnesota North Stars. One of his partners in the net that year was Dave Dryden. His brother, Ken Dryden, was a future Hall of Fame goalie with the Montreal Canadiens. I have a nephew named Dryden turning three this month. His Dad played a lot of goal "back in the day" so that's how he got his name.

My youngest son is Jordan Michael - and yes, he loves basketball right now. Had a grade seven b-ball practice this morning at 7 am. I'll be on the hardwood in the men's league at 9:15 tonight.

My three stars of the day...ladies first:)

Posted by Ralph Michael Hass at 6:23 pm No comments:

My Saturday Sabres opener on MSG-TV went like this:
THE SABRES HIT A SPEED BUMP WEDNESDAY NIGHT
AS ST LOUIS HIT A HIGH NOTE IN BUFFALO.
(They won 4-3 getting the winner with 58 seconds left)
WITH NOVEMBER NOW IN THE REAR VIEW MIRROR...
BUFFALO LOOKS TO GET BACK ABOVE .500 BEFORE HEADING WEST.
TONIGHT...CAROLINA COMES CALLING.
CANES...SABRES...NEXT IN MSG!

Well, the script to Saturday's game couldn't have gone any better as Buffalo had a gre8888t night winning 8-1! It was a balanced attack (our strength) but it was disappointing to see Ryan Miller lose his shutout with 2 minutes remaining. The Sabres will hopefully conquer California this week. Thursday, they play LA and Saturday they find their way to San Jose. Tomorrow night Ryan faces his brother, Drew Miller, and the Anaheim Ducks. #44 is assistant captain Rob Niedermayer. A former #44 with the Vancouver Canucks is now #4 there: Todd Bertuzzi. Another former #44 on Anaheim is their captain, Chris Pronger. He now wears #25. Hockey fans in my neck of the woods like to boo both Bertuzzi and Pronger for acting like butchers on the ice!

The most famous #4 of all-time in the NHL is defenseman Bobby Orr. The Sabres have a recent addition on the blueline who wears #4 too. Nolan Pratt was the Hartford Whalers 4th pick (115th overall) in the 1993 NHL Entry Draft. That same year the Whalers drafted Chris Pronger 2nd overall. The General Manager of Hartford then, Brian Burke, is now his boss again in Anaheim. The #1 overall pick in 1993 was Alexandre Daigle of Ottawa. Anaheim grabbed Paul Kariya 4th overall while Florida got Rob Niedermayer 5th overall. Quebec took current Sabre backup goalie, Jocelyn Thibault, 10th overall while the NY Islanders took Todd Bertuzzi in the first round at #23. Boo!

The Hartford Whalers were known for "going green" before it was environmentally friendly. Check out their uniforms here. Finally, two football teams that are lean, mean green machines this year - and both have quarterbacks wearing #4. The 10-2 Green Bay Packers and Brett Favre and the Grey Cup champions here in Canada: the Saskatchewan Roughriders with MVP Kerry Joseph. He actually played a few games on defense as a safety over 4 years for the Seattle Seahawks between
1998-2001. And yes, he was born on the 4th - in October 1973. I know July 4th would have been so cool but...it does get VERY cool in the winter in Saskatchewan. Here is the current forecast. Boo again...or bbbbbrrrrrr....
Posted by Ralph Michael Hass at 7:51 pm No comments:

I guess you could call me a "numbers man" as my previous three posts all had numbers in their title. November also saw me publish six blog posts - topping the record set just a month earlier in October with five.

But the number I am most excited about is the total income received in November! It is my highest total since going full-time with my voiceover career in January, 2006. I also secured my first agent in November and look forward to what he will "put on my plate." 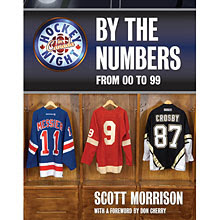 If you love hockey and numbers like I do, get the book here.

It will be a nice fixture on the coffee table as you can just pick it up and relive some great memories.

As for me, I am going to work now on an e-learning project for one of my great clients on the east coast.

I want to beat November's totals! And I hope YOU do too:)
Posted by Ralph Michael Hass at 9:48 am No comments: