Watch out for falling debris! NOT leaves or snow...

Our church has an amazing youth group! They do a lot of great work in our city and also out of town. Over the weekend the Senior Youth were in Grand Forks helping out that community with everything from yardwork to organizing a church service. To quote from the youth website:

We are an army of young people who love each other like best friends (that's called kahoots) and desire to see people meet Christ, the source of all real life!

Our daughter, Ashley, is one of four recent grads interning in the Youth Department this year. She will be taking several courses through Briercrest Bible College as well as receiving credit hours for her service with the youth at different locations. Over the years, the Youth have been known to attract a crowd when they throw items like old appliances and pumpkins off the main church building! That inspired me to find this TV intro with falling TV's from SCTV in the mid-'80's:

Posted by Ralph Michael Hass at 8:22 pm No comments:

I will be doing the public address announcing at tomorrow afternoon's Westside Warriors game. The Quesnel Millionaires will be the visitors.
On Thursday the team gave me a call as the regular voice, Wayne Moore, realized he had a conflict with the Okanagan Sun football game he was committed to. So, three Sundays in a row coming up for me "high in the gondala." What a great word - made famous by the legendary Foster Hewitt! The Millionaires sort of have a billionaire in the lineup...on defense is a 17 year old named Tyler Billon.

Hear all about the famed Maple Leaf Gardens broadcasting gondola and how its dizzying heights made strong men go weak in the knees by clicking here. This interview with Foster first aired in March of 1965.


Off to church tonight. It would be nice if a millionaire could make a donation so our church can buy another letter K... 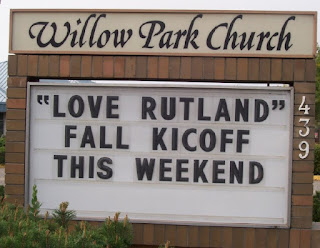 Posted by Ralph Michael Hass at 1:58 pm No comments: 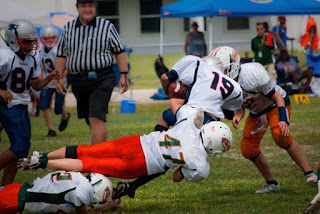 Kara Edwards is also an avid blogger like me. We both started in late 2006. She currently leads in posts with 147. But I am now only two touchdowns behind with 133 posts...Time flies when you are having fun!
Or, to quote Groucho Marx:
Time flies like an arrow. Fruit flies like a banana.
Posted by Ralph Michael Hass at 8:21 pm No comments:

NO NFL team scored 13 points on the 13th

Denver won by five and Jacksonville lost by two as they each scored 12 points today as the NFL season got rolling - but NO team scored 13. Oddly enough, I shared footage from Bills games against those two teams two posts back. However, the NFL season opener on Thursday saw Pittsburgh score a 13-10 overtime victory versus Tennessee.

The Monday night football tradition returns tomorrow. San Diego and Oakland battle for California bragging rights after the Buffalo Bills and New England Patriots go at it. 13-0 was the final score for the Pats the last time they met to close out the 2008 season. The "Thurman Thomas Show" ran for the first time this weekend and the Bills' 50th Season Moment flashed back to September 7, 1980:

A date close to that was September 1, 1980. On that date, Canadian hero Terry Fox, stopped running outside of Thunder Bay, Ontario. His primary cancer had spread to his lungs so after 143 days and 5, 373 kilometres (3,339 miles), his Marathon of Hope came to an end. On June 28, 1981, after treatment with chemotherapy and interferon, Terry Fox died at Royal Columbian Hospital in New Westminster, BC.

The annual Terry Fox Run went off all across Canada today. In Kelowna, 548 participants took part raising almost $22, 000 dollars for cancer research. Next year will be the 30th Terry Fox Run! It is an innovative and volunteer-led event, all-inclusive, non-competitive, with no corporate sponsorship, incentives or fundraising minimums.

This past Saturday and Sunday, I had the chance to be the public address announcer at the final two exhibition hockey games of the Westside Warriors. The last time I did this was two Septembers ago in 2007. I won't have to wait as long for my next opportunity as I'll be doing the Warriors' games on October 2nd and 4th. I have asked my music partner in the booth, Chris, to track down this song to get the fans into the game:
"The Warrior" by Scandal (featuring Patty Smyth) hit number 7
on the U.S. pop charts in September of 1984.

Besides a lightning strike knocking out power for a while, Sunday's game had quite the finish! Westside won 6-5 when they scored with 66 seconds left! Number 24 on defense had a great game with three assists. Hometown boy, Brendan Ellis, also had a couple penalties but number 24 on the other team (Merritt), Joey McEwan, got a little out of control with five seconds left in the game as he picked up two roughing penalties, an unsportsmanlike conduct penalty, a ten minute misconduct and a game misconduct!...sounds like John McEnroe in his prime:)

Last night at the US Open, after men's No. 4 seed, Novak Djokovic, defeated No. 15 Radek Stepanek, John McEnroe joined him from the TV booth to play a "fun" grudge match:

In case you are keeping score, John McEnroe and Patty Smyth have been married for twelve years now - and I won my first match tonight in my fall tennis league!
Posted by Ralph Michael Hass at 9:48 pm No comments: