Brewin' up a storm!

Daniel Briere just had his second ever career hat trick as the Sabres stopped the Boston Bruins cold in their tracks 7-1! The opening on
MSG-TV had me read:
Two straight third period letdowns...
A losing record for the month of January...
It’s been a rough stretch...that has Lindy looking for answers.

Tonight...
Buffalo gets a top blue-liner back...
While another will get a few looks up front.

The Sabres try to snap a slump..
Part one of two against Boston....NEXT on MSG!!!

When I sent my voice file back to Feature Producer/Writer Matt Gould I included this note:
Hi Matt,
Enjoyed your footage from the All-Star game!
Hope Briere leads like an All-Star tonight…maybe Miller needs a haircut:)

Well, Ryan Miller had the night off in net...don't know if he got a haircut during the game or not..
Daniel Briere's first career hat trick was only last month (December 5) in Tampa Bay. He was the MVP last week at the All-Star game in Dallas and you can see Matt's footage and hear his narration when you go to Multimedia at http://www.sabres.com. You become an Insider simply by registering your email address.

Last week I was interviewed for a TV show called "Okanagan Today" with Shaw TV host Tim Morton. The 3:40 second segment began running last Thursday night after 6 PM in a rotation right through the weekend. It was only on January 12 that I received a copy of my MSG-TV openings through 2006 from Matt in the mail. Like Matt, Tim did an excellent job of editing game footage and great graphics with a story on me and our favorite hockey team of all-time:
the Buffalo Sabres!
I will try to get a link up shortly to the story so the Sabres become your favorite team too .
Posted by Ralph Michael Hass at 8:07 pm No comments: 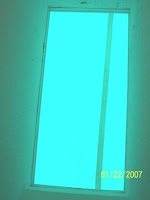 You are thinking football after seeing my headline, right? Yesterday the 2 finalists were determined: Indy and Windy. Will be a great game in 2 Sundays!
It was VERY windy at our place December 13. Can you believe the skylight was ripped off our roof after a powerful wind gust? The restoration crew will finally be here tomorrow morning to replace it. Last Thursday and Friday were out because it was snowing too much. A lovely green room, isn't it?
LOOK UP! WAY UP! THE SKY IS THE LIMIT!
"Ralph On The Roof" will not be happening anymore:) I've climbed out my bathroom window about four times to clear snow off our green tarp and reposition bricks to keep the tarp in place.
Saturday I had a super bowl when I rolled a 292 5-pin bowling - including 5 straight strikes! Beat my 13-year old by only 5 in the first game of the day before gettin' on a roll in the second game. We'll be going at it again next weekend and hopefully include some other family members.

Soup in the slow cooker is pretty awesome too so that equalled another
super bowl for dinner yesterday. Thanks dear!
Posted by Ralph Michael Hass at 9:50 am No comments: