Santa duty, day one parade last night at Orchard Park Shopping Centre. I ran into Shrek from Kelowna Actors Studio. I think he stole my black belt...I am looking forward to day two this afternoon and packing on a few pounds (via a pillow)!
By the way, "Shrek - The Musical" opens December 4th!

Fighting in hockey? Don't punch a guy with glasses!
The first Annual Kelowna Christian School Future Champions Luncheon with guest speakers, Ryan and Jennifer Walter, took place this past Wednesday, November 20th. It was great to meet them and hear their insights on leadership! Click here for Ryan's bio.
I narrated a video for the event that showed the life changing education and world changing students at KCS. Did you know former Vancouver Canuck, Bill Muckalt (like our three kids), is an alum of the school? Ryan and Jennifer have five kids and three grandchildren. Four of their children were born in Montreal, where Ryan won a Stanley Cup in 1986! His ring was passed around at our luncheon. Ryan is currently the President of the AHL's Abbotsford Heat, the Calgary Flames' farm team.

Ryan Walter's tough teammate (222 NHL fights!) back then has just written a book. Chris Nilan had a great love for the Montreal Canadiens and has a sports radio show in the city now. Read more here.

Posted by Ralph Michael Hass at 11:46 am No comments:

Yes, I WILL look good in a RED Santa suit too!

IF you want to see me smile...
1) Support someone participating in Movember. Here is the VO-MO group captained by Jeffrey Kafer. I made a donation in memory of my dad. 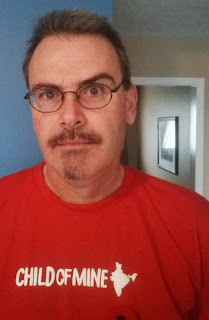 2) Buy a poppy (can you see it above?) in advance of Remembrance Day/Veterans Day on November 11.

Posted by Ralph Michael Hass at 3:44 pm No comments:

It was a special night in Vancouver on Saturday. Score it a perfect 10 thanks to Pavel Bure having his number 10 jersey raised to the rafters! By the way, his first game as a Canuck was on Nov. 5, 1991 (22 years ago tomorrow) against the Winnipeg Jets.

Enjoy the "Russian Rocket" memories below via two links, enthusiastic announcing (with Jim Hughson, Jim Robson and Tom Larscheid) and some great music! Time flies when you are having fun...with the puck...

Posted by Ralph Michael Hass at 4:56 pm No comments: