10th annual Hockey Day in Canada is over

The 10th annual Tim Hortons Hockey Day in Canada on
CBC-TV marked the first broadcast of an NHL game in the
Inuktitut language. CBC North broadcasters Charlie Panigoniak and Annie Ford called the game between the Ottawa Senators and Montreal Canadiens in Inuktitut. Later, Punjabi broadcasts were available for the Vancouver Canucks and Toronto Maple Leafs' game and the Battle of Alberta between the Calgary Flames and Edmonton Oilers. My youngest son, Jordan, and I bet on the Vancouver/Toronto game. He is a big Toronto fan and although they had a 3-0 lead after one period, Vancouver stormed back to win 5-3 - and win me a Tim Hortons' coffee!

I did not have a chance to watch any of the Hockey Day in Canada festivities today because it was a Basketball Day in my household. I am pleased to report the grade 9 Kelowna Christian School Knights won their semifinal playoff game this morning against my old alma mater, the OKM Huskies, 66-41. Then tonight, the KCS Knights beat the bigger team from KLO in the grade 9 city final, 69-53. My son, Jordan, had a couple of
three-pointers and didn't get a rest until there was 2:21 left in the 3rd quarter. Great job players and coaches on both teams!

I mentioned about a year ago how I bumped into one of my former teachers at a Kelowna Rockets hockey game. Well, tonight Mickey Patryluk mentioned on Facebook that the Rockets beat Medicine Hat, 7-2. She also shared that the 50/50 draw was worth $ 4, 400 dollars and that her six digit ticket was an identical match to the winning ticket - except the last number was off by one...

Vancouver singer Michael Bublé was on "Saturday Night Live" tonight. He is a big hockey fan and part owner of the Rockets' rivals, the Vancouver Giants. Michael Bublé's name is similar to one of the NHL's hottest players right now: Mike Knuble of Washington. Six points in his last three games while the Capitals aim for their 10th straight win Sunday afternoon. Washington hosts the Tampa Bay Lightning and with a win they would match the franchise record for consecutive victories, established from Jan. 27 - Feb. 18, 1984.
Posted by Ralph Michael Hass at 11:23 pm No comments:

Honored To Be Nominated!

96 people did a faux-dition for the opening to ABC's World News with Diane Sawyer. It was the brainchild of Peter O'Connell back on December 11th.

Yesterday, Peter and the judges released the names of the 11 voice finalists and I am humbled to be on the list. Please go have a listen to the folks on the list and cast a vote. Thank you very much if you throw it my way!

Below is another in the "not so serious" series for W4N News:

Posted by Ralph Michael Hass at 2:19 pm No comments: 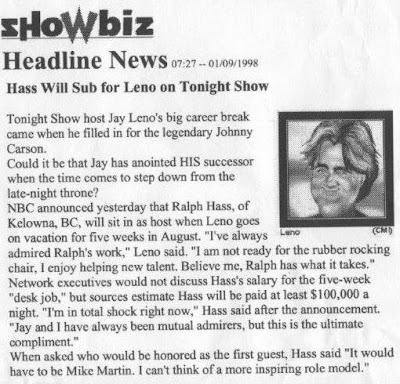 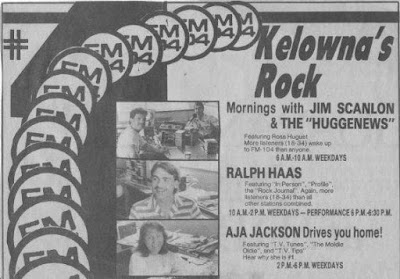 Do you remember Dallas taking Minnesota's hockey team in 1993?
A former Kelowna Rocket is making a strong impression as an NHL rookie in Dallas this season:
Stars' rookie Benn there, done that

With a playoff bye in place, Peyton Manning didn't need to play too much as the Indianapolis Colts wrapped up the regular season in Buffalo. Here is the footage (with the famous Buffalo weather in play) on last weekend's "Thurman Thomas Show":

The Bono of Basketball & a new hockey BIG man

It is the 13th and my favorite player in the NBA with that number is Steve Nash. This season he launched the "13 Club." In order to join, donors agreed to pledge $13 dollars for every assist that Nash (#13) makes. Then, in the Suns' home opener versus Golden State, Nash dished out 20 assists (he has done so twice this season; no other NBA player has topped 18). Found that tidbit in a great article titled:
The Tao of Steve Nash, the Bono of Basketball

If we go with the home teams this coming weekend in the playoffs, the results will be:
NIMS This means "to steal." So, look for:
~ New Orleans to beat Arizona
~ Indianapolis over Baltimore
~ Minnesota to get past Dallas
~ San Diego charging like a river past the NY Jets


Who are you cheering for?

Posted by Ralph Michael Hass at 9:03 pm No comments:

Clouds do have a SILVER lining

2010 - and I just printed off my first page with my new HP LaserJet 1020 print cartridge. I bought the new cartridge October 9 but by shaking the original cartridge, life expectancy increased:)
I printed off a paid client invoice and hope to do a lot more of that in 2010!
I was pretty happy with voiceover revenue for 2009. Considering the world economy, a 4.3% decline from 2008 is okay.

Big shakeups within the Buffalo Bills organization. I will be doing my final segments for the 2009 season tonight for the "Thurman Thomas Show." I hope I will NOT be delivering a eulogy...

Congrats to the U.S. for winning gold at the World Junior Hockey Championship in Saskatoon! This officially ends my Christmas holidays. Our remaining outdoor Christmas lights are being turned off to "mourn" Canada's 6-5 overtime loss last night to the USA. So, we Canadians can't celebrate a sixth straight gold medal here on the 6th. But silver isn't too shabby either!


I would say this cheer did not inspire our young men enough...

Posted by Ralph Michael Hass at 2:50 pm No comments:

Posted by Ralph Michael Hass at 8:01 pm No comments:

Robert Scoble is considered the King of social media. Who does
he consider the top-ten tech tweeters for 2009? I was made aware
of THE LIST by Guy Kawasaki, who came in at number 10.

Here is this weekend's Buffalo Bills game recap on the "Thurman Thomas Show." Not much to write home about - unless you are defensive end Aaron Schobel:

Today, Buffalo had a blowout win against the Indianapolis Colts, 30-7. It was really a meaningless regular-season finale as Indy finishes 14-2 and has a bye next week to start the playoffs. Buffalo finishes 6-10 and misses the playoffs for a tenth straight season. But, 2010 will be a better season once it starts in September. Trust me! I already predicted at the end of my last post that the Buffalo Sabres would beat the Atlanta Thrashers - and they did, 4-3. In fact Buffalo won again today, 1-0, in Montreal. Exactly halfway through the season, Buffalo is second in the Eastern Conference with 56 points and a 26-11-4 record.

How would you like to win a brand new car?
Greg Sczebel is a Juno winning singer/songwriter who is giving you that chance. Click here for all the details.
Posted by Ralph Michael Hass at 11:11 pm No comments:

Welcome to 2010! I hope it will be a great year for you!
Here are 10 Things Voice Talent Could Be Doing For a Better 2010 from Stephanie Ciccarelli at Voices.com.  Yes, I contributed my two cents...

Boston won against Philadelphia, 2-1. Who stepped up to the mic? NBC had announcers Mike Emrick and Mike Milbury working the game while Al Michaels remembered the 30th anniversary of the "Miracle On Ice." Mike Eruzione was the captain of the 1980 gold medal U.S. team. Found at the Puck Daddy blog, here is the greatest moment of Al Michaels' career.

Other Mikes who stepped up today included Philly's goalie, Michael Leighton. There was also Mike Richards, the Flyers' captain, while Boston had Michael Ryder up front. By the way, Al Michaels will serve as host of NBC's live weekend and weekday daytime coverage of the Vancouver Winter Olympics. Just 42 days away...

What's old is not happy or new when it comes to the New England Patriots beating the Buffalo Bills. 13 straight now! I got a little more air time than usual in this game recap on the "Thurman Thomas Show":

This weekend on the "Thurman Thomas Show" we'll have highlights of the loss to Atlanta last weekend while the classic flashback will be from January of 1992 against Denver. Déjà vu in the NHL shortly as Buffalo will be hosting Atlanta. The Thrashers have beaten Buffalo six straight but I predict that will change starting tonight! A New Year is all about a little change, right? Just my two cents...again...
Posted by Ralph Michael Hass at 3:43 pm No comments: