I asked that question three years ago yesterday with a blog post that said Cue Weird Al Yankovic!

Recent examples of the Name Game saw me make it to Hollywood Park in Kelowna last night. The shirt pays tribute to the former stadium named for the late Hall of Fame owner of the Buffalo Bills, Ralph Wilson. 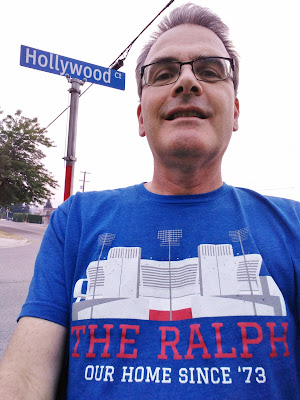 I think a lot of cities have a Hollywood in it. What about yours?

We are also close to a Winfield here in British Columbia. There are a lot of Winfields in the states - including in Alabama, Kansas and Missouri. Then I found more with Google.

Baseball has a Hall of Famer named Dave Winfield. The Toronto Blue Jays couldn't have won their first World Series without him in 1992! He was over 40 years old, yet batted .290 with 26 home runs. His run-scoring double in the top of the 11th inning of Game 6 saw us take the championship against the Atlanta Braves!

On Sunday, Miguel Montero was catching his first game for the Blue Jays when Miguel Cabrera drew an RBI walk to win it in the 11th for Detroit. Rather interesting that both teams also had Joses and Justins in the lineup. Anibal Sanchez started for the Tigers but Aaron Sanchez did not for Toronto. He IS tonight though in Boston - a team he has beaten four straight times.

Meanwhile on this Wednesday, Aarón Sanchez is back as one of the three judges on MasterChef. Even though it's National Hot Dog Day, I see they are cooking as teams with eggs in a restaurant.


Posted by Ralph Michael Hass at 3:20 pm No comments: