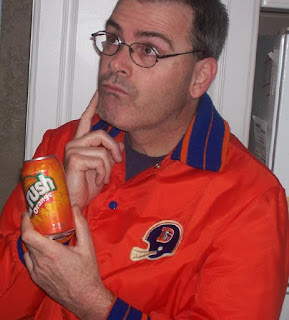 There were some shocking surprises this weekend in the sports world! 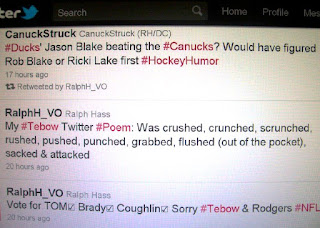 Hope you enjoyed my Tebow Twitter Poem above. I wouldn't call it Slam Poetry. We'll leave that to Shane Koyczan, who I first introduced you to about two years ago:
Do you remember Roberto Luongo of the Canucks reciting poetry?
Hockey Hilarity via Poetry

Posted by Ralph Michael Hass at 2:19 pm No comments:

Time To Ride Tebow's Arm To Victory in NE? NO! 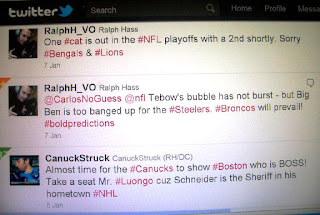 Who could have predicted that Tim Tebow would come up big in the Wild Card game on Sunday the 8th?

Apparently, I did:) 29-23 was the final for Denver over Pittsburgh. Here are the highlights - finishing with a winning touchdown pass in overtime! Wow! Tebow had more 40+ yard completions in the second quarter alone (3) than Mark Sanchez had for the New York Jets all season!

Here are the Top 10 Tebow Tidbits from the game from ESPN.

The Denver Broncos last played a Saturday playoff game on January, 14, 2006 versus New England. Six  years later, on the same day, it will be the same opponent. These were the last two teams my Buffalo Bills played this season:


This weekend I think the Brady train will prevail over Tebow. Have to go with New England! As for your Super Bowl winner on February 5, I'm picking the Green Bay Packers to repeat.
Posted by Ralph Michael Hass at 2:38 pm No comments:

Time To Ride The Bike?

The subliminal advertising message below is:
"LIGHT it up in 2012. Have a great year!"
And keep your New Year's resolution of exercising:)

Nice mild winter day in Kelowna, BC. In fact, my wife is out biking right now.


I just entered this contest for a bicycle trip for two to . Cycling is one of the finest ways to experience the varied landscapes and cultural highlights of .
Here is the link to a funny bike commercial I recently voiced.
Posted by Ralph Michael Hass at 2:13 pm No comments: