Control Your Speech. Be positive - NOT negative

Wise words from Pastor Tim in his newspaper column this week and he issued a challenge:


See how often you can incorporate the following phrases into your language and just watch your environment change:


Tim has hockey in his blood and he references Roberto Luongo in his column. We should build people up rather than tearing them down. My two cents? Please apply this to social media too.

Case in point from Derek Chappell:

Posted by Ralph Michael Hass at 12:09 pm No comments:

The powerful voice of the Chicago Blackhawks is Pat Foley. He was honored for thirty years of service before last night's 5-4 overtime win against Nashville. Hat tip to Adam Santic for the link! 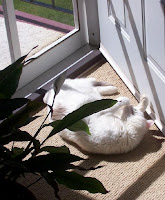 Posted by Ralph Michael Hass at 12:16 pm No comments:

The 1970 expansion cousins in the NHL just played on a Saturday afternoon. The Buffalo Sabres won, 1-0, against Philadelphia while the Vancouver Canucks lost, 4-3, in Colorado.

Maybe you heard me on the MSG-TV broadcast in Buffalo?


Did you know today is National Scrabble Day? I love Scrabble! I came out ahead (324 to 288) last night playing my wife:) 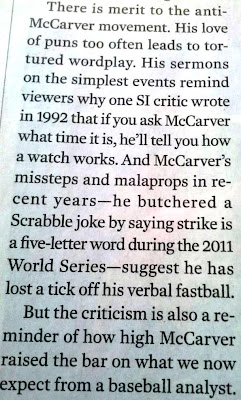 Tim McCarver's 31 year broadcast career will come to a close after he works his 24th World Series this fall. Are you a fan or not of Tim? Who do you like behind the mic for a baseball game?

Posted by Ralph Michael Hass at 2:57 pm No comments:

Seattle versus Kelowna Was A Modern Day David versus Goliath

It was a "David versus Goliath" matchup in their opening round WHL playoff series for the Kelowna Rockets. They finished a whopping 50 points ahead of Seattle during the regular season! And I guess their answer to Goliath would be Golbourne, who had a team-leading 135 penalty minutes during the season. But we all know how that Bible story ended...

Seattle started strong in the series - winning the first three games against the Rockets - ALL in overtime! But in an epic comeback, the Kelowna Rockets won four straight (including overtime last night!) to advance to round two!
This had happened only once in league history - when current Detroit Red Wings coach, Mike Babcock, coached Spokane in 1996.

Overcoming a 3-0 playoff series deficit has never happened in the NBA and only three times in the NHL (Toronto in 1942; New York Islanders in 1975; and Philadelphia in 2010). By the way, the largest point differential overcome in the NHL playoffs was 48 - when the LA Kings beat Edmonton in the 1982 playoffs. The "David" was Daryl Evans and, of course, the "Goliath" was Gretzky!

Posted by Ralph Michael Hass at 10:32 am No comments: