The late, great Michael Jackson came to Vancouver in 1984. He performed three sold-out concerts at B.C. Place but also had a run-in with police. However, that was a positive experience and NOT a negative one.
See the story, picture and video here.

"Everybody learned something" from Michael Jackson is how this clip started off last night on ABC's 20/20. It was in reference to his amazing influence in making videos. Through the media, we have all learned a lot more than we ever knew about Michael since he died on June 25. Unfortunately, too much of it is sensationalized and I don't think it
will end after Tuesday's public memorial service.

Here are some life lessons that I wish Michael Jackson had taken to heart:
-- It is more important what is on the inside than the outside
-- Take advice from those that truly love you
-- Money can't buy happiness

Remembering Michael Jackson in Music and in Sports.

This is a good read from Michael Ielpi, a New Jersey Devils fan.

If you would like to "Step Up to the MIC" as a voiceover artist, you will want to click on this link for a book by Rodney Saulsberry.
Posted by Ralph Michael Hass at 10:49 am No comments:

Saluting the Red, White and Blue

To all my US friends, I hope you have a great Independence Day coming up on July 4th!

We celebrated Canada Day yesterday and I made sure to sport something red. My Buffalo Bills shirt had that and so did our new basketball net. My "artistic" photo taken tonight is here: 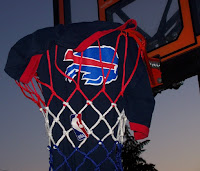 5 marketing lessons from Ralph the artist.

This is not from me but Atlanta voice-over talent, Karen Commins.

Also new on the blogroll today is Atlanta's Craig Crumpton with Voice Actors in the News.

Posted by Ralph Michael Hass at 10:25 pm No comments: