99 - Wayne Gretzky's old number. On April 18, 1999 it was retired league wide in the NHL. There is a new book out called "The 33-Year-Old Rookie." Chris Coste is a baseball catcher with the Philadelphia Phillies. His road to the big leagues was not as easy as Gretzky's. I love stories like this about perseverance and pursuing a dream! I am hoping Philadelphia's hockey team loses tonight in the opening round of the playoffs. Game 7 against the Washington Capitals. I have 2 Caps in the radio station playoff pool! The other game 7 tonight sees Calgary against San Jose. I'm hoping for the Sharks over the Canadian team as I have 3 "Sharks in the pool" - including their best player, Joe Thornton.

The last time I was in radio (until this month at B-103) I was 33 - 11 years ago. Earlier this month my friend, Stu Gray, turned 33 and he made a list of the first 33 things that came to his mind dealing with things that he has been learning, some quotes that he likes, and just random thoughts. One for every year of Stu's life so far. The list starts off with legendary basketball coach, John Wooden. Last month I referenced Coach Wooden's inspiring website too. I learned a lot by reading Stu's list. Check it out:)

According to government estimates, the world's population will hit 6, 666, 666, 666 on May 10. For what it's worth, that's also the day President Bush's daughter, Jenna, is scheduled to be married in Crawford, Texas. Husband Appreciation Day was yesterday (April 21) so Jenna is off the hook this year...
Posted by Ralph Michael Hass at 2:26 pm No comments:

Here's the story I saw this morning on CNN. A link to the earliest voiceover artist? Here is his demo. More creativity from "Cavemen" by clicking here.

In other news, CBS has put an end to rumors that Katie Couric might be exiting from her CBS Evening News post before her $15-million-a-year contract expires in 2011. A week ago, CBS said in a statement, "We are very proud of the CBS Evening News, particularly our political coverage, and we have no plans for any changes regarding Katie or the broadcast."

I continue my news career by introducing the crazy antics on W4 News. Episode 2 was released ten days ago and currently has almost 9, 500 views on YouTube. Episode 3 was released this week. Stay tuned for Episode 4...maybe Elvis will do the weather?
Posted by Ralph Michael Hass at 9:46 am No comments:

Elvis' team lost - and I have entered the building AGAIN!

Kansas beat Memphis Monday night, 75-68 in OT, to win the NCAA basketball title. I predicted that! You can ask my teenage son, Jordan.
He picked Memphis. I also exchanged emails with Joe Pinter, one of the producers for the MSG-TV Buffalo Sabre broadcasts. My Kansas prediction was in my email while Joe wrote earlier: Your voiceovers have really added a nice element to our broadcasts, and I'm very happy that you have been in "our mix" the last 2 seasons.

Unfortunately, it is Sayonara to the Sabres for this season as we just missed making the playoffs. But I am doing playoff reads for Shaw TV as we are now into round two for the Western Hockey League. I also just finished my third e-learning project in the last ten days for NogginLabs. Later today I will start on a banking tutorial for the Edcomm Group that should involve an estimated 11-hours of recording time. I have over a week to do that one - but the last weekend of March saw me put in long hours on one that had 221 pages to record.

This past weekend saw me bring on a fantastic new client,
B-103 - Kelowna's Best Country. They want me to be me Saturdays from
1 - 5 pm and Sunday mornings from 9 am to 1 pm. The last time I worked in the radio building was in 1997 with a rock format. I went through training last Thursday and Friday with Dave Pears on the midday show and it brought back memories of 1981, when Dave did the same thing when I was a young and impressionable grade 12 student.
...oh, how things change...and stay the same:)

I had fun aligning country music and timing things out for the news at the top of the hour. Did three breaks an hour and didn't do anything shocking - unless you count the movie passes I gave away to "The Ruins."

I didn't strut either. I also didn't sit. I stood the whole time...hopefully offering a better vocal performance...
Posted by Ralph Michael Hass at 12:44 am No comments: 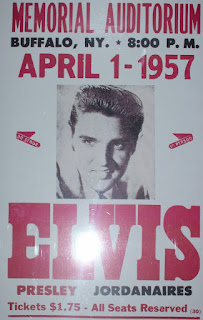 How was your April Fools' Day?
My son, Jordan, and I went to a concert in Buffalo...
My opener on MSG-TV tonight said: THE SABRES SURVIVED OVERTIME ON SUNDAY TO LIVE ANOTHER DAY. THREE GAMES LEFT...ALL “MUST WINS”...ALL ON THE ROAD. FIRST STOP...THE A-C-C. THE LEAFS ARE OUT...AND WILL TRY TO DISMISS THE SABRES FROM THE RACE FOR THE PLAYOFFS.
Buffalo scored with just over five minutes left (#33 for Thomas Vanek!) to tie it up (3-3) and then in the sixth round of the shootout, Maxim Afinogenov, faked right and shot left against Toronto goalie Andrew Raycroft to give us the victory! A-R is a former Bruin and we beat Boston in overtime on Sunday, 2-1. Needed those two points as well! The Sabres' slim playoff hopes remain "on their last breath" (that was in my script Sunday) with two games left: Montreal on Thursday and Boston this Saturday.
Last Saturday, my son Jordan became a teenager! On March 19, Billy Pinter did too. His dad, Joe Pinter, is one of the producers for the MSG-TV Sabre broadcasts. Unfortunately, Joe has had to work on his son's birthday for six straight years!
Last week, another Voices.com lead came through for me. It was imaging for the Independent Comedy Network for a faux internet newscast. This afternoon the first episode of W4 News was released and that's me "getting the ball rolling" with my voice. Look and listen at that link and you will laugh! Four more episodes to come...
Posted by Ralph Michael Hass at 7:55 pm No comments: