DisQualified on DWTS on the same night as Edmonton and Vancouver played in their 200th all-time NHL meeting? Surprisingly, Rick Fox! The retired pro basketballer was born in Toronto 41 years ago. By the way, Vancouver won the game, 4-3, and now trail the all-time series with the Oilers, 77-96-27.

I am hoping Jennifer Grey wins it all against the other four teams on "Dancing With The Stars" because she is a cancer survivor! 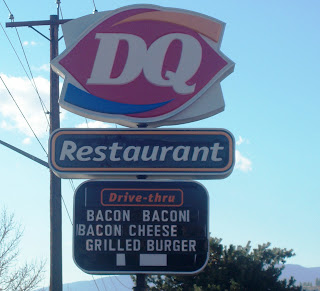 I had the famous Dairy Queen sign in a blog post two months ago, but snapped this today with the beautiful blue sky and mountains in Kelowna as a backdrop. The word bacon three times on the sign made John Bigl's day I think. John is a voice talent in New Hampshire who loves bacon and hockey big time! I shared the latter before on Welcome this amazing Goalie!

Tomorrow, our teams collide. Boston is riding high with Tim Thomas sizzling in the net. He was just named the NHL's Second Star for October thanks to a 6-0 record with three shutouts, a 0.50 goals-against average and a .984 save percentage. Buffalo's Ryan Miller is just 3-5-2 with a 2.71 GAA and .903 save percentage and will likely miss the game with a lower-body injury.

My top pick in my Hockey Pool is out for three months! I introduced you to Zach Parise and the rest of my team here. Today, Zach (of the New Jersey Devils) underwent exploratory arthroscopic surgery on his right knee and had a torn meniscus repaired. So I guess he'll be back when baseball spring training starts...

Congratulations to the San Francisco Giants for winning the World Series yesterday!