Football and the "Lost" conspiracy?

Football is a rough sport. There are a lot of head injuries.
I had a headphone injury this week in the studio but got them taped up for more action - which includes my third season for the Buffalo Bills starting next week. 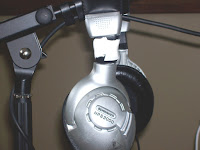 I am predicting that 40-year-old Brett Favre will see his ironman streak end this season with the Minnesota Vikings. He has started 253 consecutive games at the quarterback position (275 including playoffs). Got that info off the Official Brett Favre website but notice his last two seasons with Minnesota and the New York Jets aren't included on his bio page. It would have been nice too if Brett mentioned he shared the same birthday (October 10) as my dad...

My wife had her birthday this past Tuesday - the same day "Lost: The Complete Collection" and "Lost: The Complete Sixth and Final Season" were released. Darlene stuck with me through the first two seasons before abandoning ship. My daughter stayed for one more. There is a 12-minute epilogue on both DVDs featuring Hurley called "The New Man in Charge." He would have been a great football offensive lineman!
Meanwhile, Weezer named its 8th album after the one and only Hurley.

"Lost" cast members who have done football movies include:
Both are on this extensive alphabetical list:
Best Football Movies of All Time – Gridiron Action.
I hope I am not the only one who remembers Disney's "Gus" from 1976...
Posted by Ralph Michael Hass at 3:56 pm