Sports Docs That Rock in Philadelphia and beyond!

I am not talking about sports documentaries like this one that I narrated for the Buffalo Sabres.
Mike "Doc" Emrick makes the NHL playoffs come alive with his vocabulary on NBC: 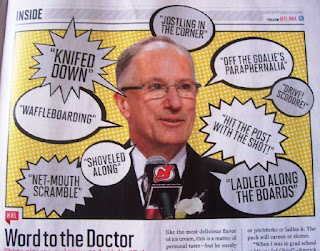 Doc Rivers and "Dr. J" were in Philadelphia last night. The legendary Julius Erving is back with his former team as a strategic adviser. Meanwhile, the 76ers forced a game 7 Saturday night in the Eastern semifinal by beating Boston and coach Rivers, 82-75. Pick Shaq's former team, the Celtics, to win game 7. All that history in Boston!

Another famous athlete nicknamed Doc in Philadelphia sports is baseball's Roy Halladay. His bobblehead doll on the MLB.com site was just pulled because it wasn't right. It had him as a lefty pitcher! Ouch!

Did you know earlier this month that Shaquille O'Neal received his doctoral degree in education from Barry University? He wrote his thesis on the value of humor in leadership. I feel Dr. Shaq made a wise decision today in turning down an opportunity to lead the way as general manager of the Orlando Magic. It means we get to enjoy him more as an analyst on TNT.
Posted by Ralph Michael Hass at 4:34 pm