The cat is out of the bag!

For three weeks now, I have been on Twitter...I did beat my cat to Twitter after all...scroll to the end of this post from last summer.

Today on Twitter I learned that the Toronto Globe and Mail named #Rush's #RedBarchetta the top Canadian car tune in celebration of #Junos week. I just learned more about hash marks here. Click here for the Top 10 Canadian car tunes!


The Juno Awards go tomorrow night - honoring Canada's top musicians. As I finished up my fifth and final year with Warner Music Canada in 1996, I had the chance to take in the Junos out east in Hamilton.

The host for the evening was Burton Cummings while inductees into the Canadian Music Hall of Fame included:

Below, I am with Craig Northey of Odds fame at a Juno party the previous night. 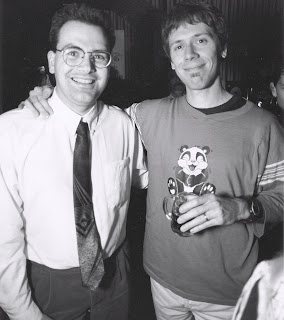 It was a year earlier on February 22, 1995 that I arranged for Odds to sing the national anthem at a Kamloops Blazers hockey game against the Prince George Cougars. The next night, Odds opened for the legendary Tragically Hip in Kamloops. See the autograph I got here!
Craig is a BIG hockey fan and he sent this note through to the Kamloops Blazers when they won the Memorial Cup later in 1995: 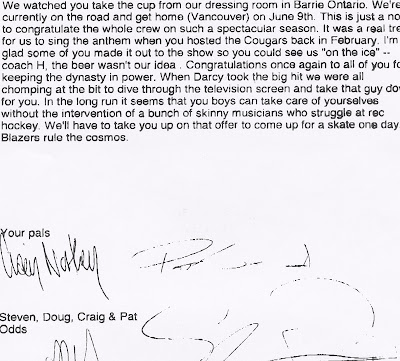 Keep up to date with Craig and Odds here.
Posted by Ralph Michael Hass at 5:42 pm