Words of Wisdom from the BBall court

I was hooping it up Thursday night as usual with my basketball-playing friends. We have a regular group who play at Immaculata High School in a 35+ league. It has been a fundraiser for the school since 1992 and I have been part of the action for the last five years. 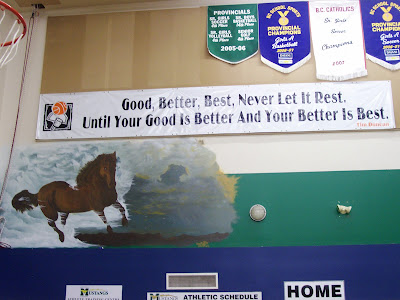 The picture here is from the gym and the quote belongs to NBA great Tim Duncan.

Congratulations to the Senior Boys basketball team from Immaculata on a great showing at the Senior A provincials! They will play for third tonight after losing a heartbreaking 60-58 decision to West Point Grey last night.

My son's team, the Kelowna Christian School Knights, are the number one ranked team in the tournament and play West Point Grey in the finals tonight at 7 pm. They will be coming home on the bus right after the game so pickup may be around 1:30 am...I better rest now...Go Knights! 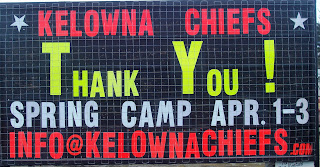 Before my basketball on Thursday, the Kelowna Chiefs had another Pizza Appreciation night for staff and volunteers to wrap up a great first season in the KIJHL! As I blogged before, I appreciate Thank Yous!
It was my pleasure to serve as the public address announcer for my neighbourhood team. Several handshakes and even a couple of hugs as
I left the building...Hockey has a way of drawing people closer together.
Posted by Ralph Michael Hass at 11:10 am