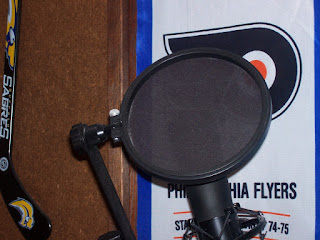 Thanks to a couple of Mikes, Philadelphia should be meeting Chicago in the Stanley Cup Final. The Blackhawks beat San Jose today, 4-2, to sweep them in four straight. Philly - and captain Mike Richards - host Montreal tomorrow up three games to one in the other semi.
The one and only Don Cherry paid tribute to Philadelphia goalie, Michael Leighton, yesterday on his "Coach's Corner" segment along with another Mike - Cammalleri of the Canadiens. He compared him to Luke Skywalker. Check out the amazing footage here of Cammalleri and his lightsaber.
"Speak softly and carry a big stick; you will go far in the playoffs."
Posted by Ralph Michael Hass at 5:58 pm