Mike 'Doc' Emrick called his 3, 000th pro hockey game Monday night
in Detroit! He is a Michigander and the number of pro games that he
has broadcast is about the equivalent of some 36 ½ NHL seasons.
The full story is on the Detroit Red Wings' website.
I have a lot of catching up to Mike to do BUT here is my
latest for future NHL'ers: 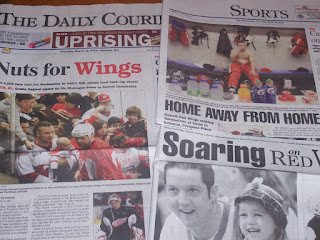 They are on a roll too having won five of their last six games while our province's team, the Vancouver Canucks, have lost three of four - including to Detroit in overtime on Saturday, 4-3.

March Madness basketball resumes tomorrow with the Sweet Sixteen. There were 48 games last week between Thursday and Sunday. I pointed out in my last post that 14 is a fabulous number! But there was only one game in those 48 that was decided by exactly 14 points: the Ohio Bobcats (ranked 14th in the Midwest region) shocked #3 ranked Georgetown, 97-83, for their first tournament win in 27 years. I picked the underdog Washington Huskies to advance to the Sweet 16 tomorrow against the West Virginia Mountaineers. The Huskies' streak may come to an end but as I watch the 12 games this weekend, I'm hoping more games are decided by exactly 14 points. I know this is more common in football...
Posted by Ralph Michael Hass at 1:02 pm