Gretzky at the Olympics / My Gretzky flashback

Wow! Wayne Gretzky got to light the cauldron to start the Winter Olympics on Friday night!

I remember I could have met The Great One in Vancouver in late 1994. It was an album launch party for  "The Christmas Album" by David Foster and Gretzky was one of many VIP's there - along with his co-owner of the Toronto Argonauts football team, the late John Candy. Los Angeles Kings' owner Bruce McNall also had a stake in the Argos, which lasted about three years for the partners. At that time I was working in promotions and sales for Warner Music Canada, who distributed "The Christmas Album" in Canada. I got a nice keepsake from Foster at the event: 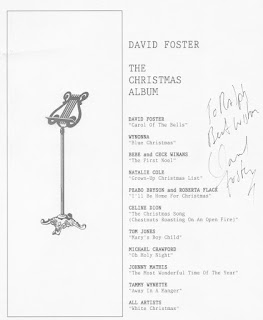 I remember chatting with the Edmonton manager, Lina Botto, at the event and encouraging her to go over and introduce herself to Wayne Gretzky. I thought it was more important for her to have that privilege than me. I mean, she had the perfect opening line - that she was from Edmonton, where Gretzky starred from 1978 - 1988. The rest, as they say, is history - just like this list from a year-end Warner Music newsletter:

Happy Valentine's Day!
The Great Lady in my life and I have been married 21 1/2 years.
Thanks for all the memories so far Darlene!
Posted by Ralph Michael Hass at 10:46 am