Two months ago today I saw "The Blind Side" with my daughter. That was a great football movie! The preview that night was for "Avatar" and I knew I would want to see that movie. It has been #1 at the box office for seven straight weeks and is now only about $6 million dollars behind James Cameron's all-time epic, "Titanic", from 1998 ($600.8 million dollars in North America). But I have NOT seen "Avatar" yet. Don't laugh at me! We actually didn't watch "Titanic" until it came out as a rental...I will take my wife to "Avatar"  this weekend...I promise. This past weekend my wife was working but managed to make it to the big basketball games I told you about two days ago.


I emailed coach Eva Linttell (far left below) today and said she could be compared to Sandra Bullock’s wonderful character (Leigh Anne Tuohy) in “The Blind Side” for the mentoring she has done over many years with many of the boys on the basketball team. And Mr. Dave Bingham coached our other son, Justin, in basketball last season and it has been a pleasure to be able to get to know him too – although he seems to have an addiction to Dairy Queen:) 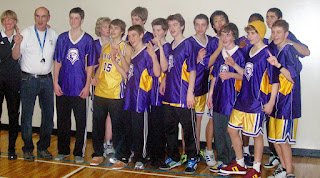 Appropriately enough, there is a basketball
tie-in with “The Blind Side.” Sean Tuohy (Leigh Anne's hubby) is in his ninth season as a color commentator for the
Memphis Grizzlies. From their website, it says:
As a player at Ole Miss, Tuohy finished his four-year Rebel career (1978-82) as the SEC and school’s all-time leader in assists (830). The New Orleans, La. native led the Rebels to their only SEC title in school history by winning the 1981 SEC Tournament Championship and guided the team to its first NCAA Tournament appearance the same year. Drafted by the New Jersey Nets in the 1982 NBA Draft, Tuohy opted to continue his career overseas before returning to the Mid-South to lead his own team, this time in the fast food industry. As a
co-founder of RGT Management Inc., Tuohy currently oversees the day-to-day administration of the current system’s 62 restaurants, which include Taco Bell, Pizza Hut, KFC and Long John Silver’s franchises.
Quite a night for the Memphis Grizzlies as they beat Kobe Bryant and the Lakers, 95-93. But Kobe became "King Of The Hill" passing Jerry West as the Lakers' all-time scoring leader. See the big basket here.
Posted by Ralph Michael Hass at 9:19 pm