Number 32 is NOT welcome! 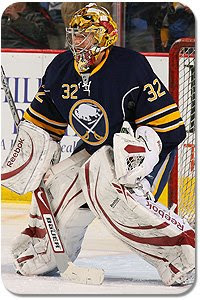 No, I am NOT superstitious.
But Friday the 13th is a week away!

It was a busy trade deadline day for the Sabres as they made a few moves. This included Tim Connolly agreeing to a new two-year contract.

Mikael Tellqvist (Photo: Getty Images) came over from Phoenix as a backup goalie - and that is who the Sabres host tonight. But Patrick Lalime will start in net after his spectacular 5-1 win over Montreal two nights ago. Anyway, Tellqvist will be wearing #32. I don't like that number! #32 belonged to O. J. Simpson when he was a Buffalo Bill - and now he is a jailbird!

The Sabres have 32 wins right now. After tonight's game against Phoenix, I expect that total to be 33. Thomas Vanek has 32 goals and let's hope he gets #33 tonight. He has been stuck on 32 since a hat trick against Toronto on February 4th. Vanek has not been in a slump; he broke his jaw against Ottawa February 7th.

In case you were wondering, Buffalo has NO 32 year old players on the roster. The closest would be Jochen Hecht and Toni Lydman , who are each 31, but won't be celebrating their birthdays until June and September, respectively.

I have another birthday on March 14. 32 is in my rear view mirror BUT I am a LOT younger than O. J. Simpson! And I think I could outrun him too...
Posted by Ralph Michael Hass at 1:00 pm