Tonight, Steve Nash and the Phoenix Suns beat the Milwaukee Bucks 114-105. Nash slashed and dashed for 37 points and passed out ten assists. Two years ago today on January 22, 2006, Kobe Bryant scored 81 points for the LA Lakers against the Toronto Raptors. It is the second highest single-game point total in NBA history, behind only Wilt Chamberlain's 100 over 40 years ago.

The Phoenix Coyotes hosted the Sabres yesterday and we lost 6-2. Another one of my favorite players is Shane Doan. He was the first star in the game. As team captain, he also extended his career-best points streak to 11 games.

Phoenix hosts Super Bowl 42 in a couple of weeks. Will New England go through the whole season undefeated? Yes is my answer. Let me be the first voiceover person you know to predict the outcome. I'll say 30-20 for the Pats over the Giants. Feel free to leave a prediction here:)

Earlier this month, I mentioned that Chris Chelios of the Detroit Red Wings became the second-oldest player in NHL history at 45 years and 348 days when the Wings hosted the Colorado Avalanche. Well, when the Giants' Jeff Feagles appears in the Super Bowl, he will be the oldest participant ever at 41 years, 335 days. The previous oldest was another punter, Mike Horan, at 40 years, 363 days. Feagles began his career with the Patriots in 1988. I found that tidbit at the NFL site under XLII facts about Super Bowl XLII. 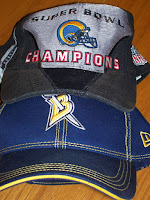 Horan ended his career by winning the Super Bowl with the St. Louis Rams in 2000. I celebrated their victory - just like my main contact with the Buffalo Sabres, Matt Gould. He was a big fan of the Rams too!
Posted by Ralph Michael Hass at 7:45 pm