Buffalo Sabres have a new #50! Cue the playoffs!

Congratulations to Nathan Lieuwen on starting his first game in the net for the Sabres last night in Calgary!

I hope he has a long and successful career like Dominik Hasek, who will be inducted into the team's Hall of Fame during a ceremony March 29 at First Niagara Center. Sadly, the Sabres became the first NHL playoff casualty, knocked out in Sunday's loss to Montreal. 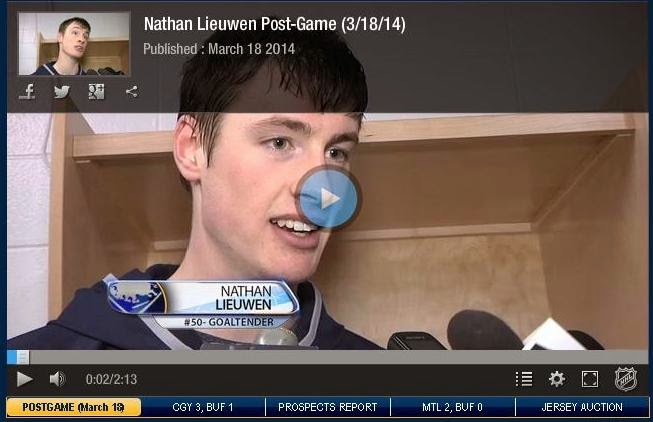 Nathan Lieuwen's old junior team, the Kootenay Ice, open the WHL playoffs in Calgary tomorrow night. Lieuwen also played here in West Kelowna with the junior A Warriors for a brief time. Small world...although he is 6' 5":)

Kelowna Rockets goalie Jordon Cooke was the team MVP this season and he is playing for a pro contract so he wants to shine in the playoff spotlight. The Rockets finished 50 points ahead of their first round opponents, the Tri-City Americans. That series starts here on Saturday night. The Rockets won't be taking Tri-City lightly even though they won all four regular season matchups. Last year in the opening round of the playoffs, Kelowna also played a team they had a 50 point cushion on and the Seattle Thunderbirds won the first three games before Kelowna had to pull off four in a row.


I see last March I had fun with the number 50 too on this blog: