Live Long and Prosper are the words that accompany the Vulcan salute. It is a hand gesture consisting of a raised hand, palm forward with the fingers parted between the middle and ring finger, and the thumb extended. Thank you Leonard Nimoy! The new "Star Trek" movie looks to be a big hit and features an appearance by Nimoy. This review says it Should Live Long and Prosper.


Live at Prospera Place this morning were three radio stations and fans like me to help send off the Kelowna Rockets to the 2009 Memorial Cup in Rimouski, Quebec. Susan Knight of Sun FM said it would take 41 days to walk there... 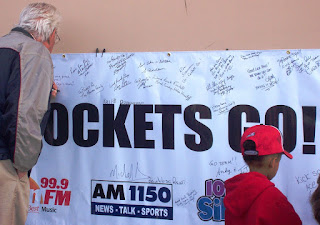 BUT the Rockets boarded their team bus and had a charter flight waiting at the airport. The Rockets won the Ed Chynoweth Cup Saturday at Prospera against Calgary! The game went into overtime with Kelowna winning 3-2. The MVP of the Finals, as he was in the Western Conference Final against Vancouver, was Tyler Myers. His incredible season included signing a pro contract with the Buffalo Sabres on Monday! Here is the link off the Sabres' website. 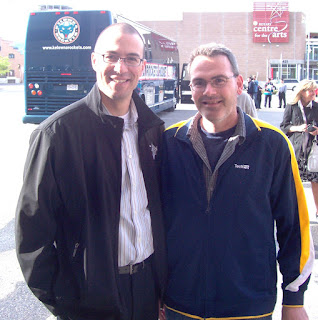 I ended my last post with "the scoop" on some NHL coaches. Here I am this morning with the Rockets' Ryan Huska, the seventh head coach in Rockets franchise history. He is very calm, cool and collected behind the bench and has a bright coaching future ahead of him. He is only 33. How can you go wrong with someone who has the initials RH?