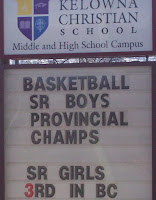 My kids' school ended up on top at the Provincial basketball tournament recently! Way to go guys! The senior girls also had a strong showing. My daughter, Ashley, is the sign changer at school. At our house today we got our new basketball hoop up and running! But Ashley was not around to enjoy it. She is part of the team of 70+ youth who headed off to Los Angeles on Friday for 10 days at spring break. The ministry Willow Park Church youth are partnering with is called "The Dreamcenter." Details here: http://www.dreamcenter.org/
It will be a life changing experience for her!

Going to California and the San Jose Sharks at the trade deadline on February 26 has worked out well for former Sabre, Brian Campbell. He had an assist in his first game against Columbus, which San Jose won 4-2. The Sharks won their next 8 before finally losing tonight in a shootout to Edmonton, 2-1. Campbell had a chance to win it late in overtime but the goalie gloved it and Campbell flipped his stick away in disgust.
Couple of California basketball coaching legends shared page 20 in the March 10 Sports Illustrated. The news was positive for UCLA's John Wooden after breaking his left wrist and collarbone in a fall at home. He is 97. Amazing guy! He also received two blood transfusions at the hospital because doctors discovered that he was anemic. John Wooden's website is filled with many inspiring quotes. Check 'em out! Pat Riley guided the LA Lakers to NBA championships in 1982, 1985, 1987 and 1988. Two years ago he led the Miami Heat to the title but this year they are a miserable 11-54 - prompting this quote: "I feel like a mosquito in a nudist colony. I know what to do; I just don't know where to start."
Happy 63rd birthday coming up on March 20 Pat!
Yesterday, "Mr. Hockey" Gordie Howe had a big 80th birthday bash thrown in Vancouver. His actual birthday is March 31.
Posted by Ralph Michael Hass at 9:27 pm