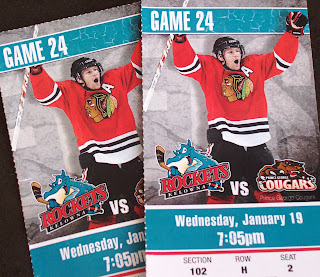 It was a great result at the Kelowna Rockets 24th home game tonight! A 6-2 win over the Prince George Cougars! It was one of only three WHL games tonight.

There were also just three games in the NHL tonight. What happened Canada?! Toronto lost to the New York Rangers, 7-0, while Calgary was shutout by Minnesota, 6-0. OUCH!

2011 Unofficial Casting Call for The Price Is Right
There are five finalists left﻿ and your vote is needed before 5 pm EST on Sunday, January 23 to crown a new champ! Let your vote be heard here. Get your vote in before the game starts between the Pittsburgh Steelers and New York Jets. I am predicting Pittsburgh to win on Sunday to move on to the Super Bowl against Green Bay, who must win in the Windy City of Chicago earlier on Sunday.
Posted by Ralph Michael Hass at 11:49 pm