The Chiefs are in charge!

The Rogers Cup tennis tournament is taking place in Montreal right now and many of these ladies' names would be a bit of a challenge to pronounce. Just today, Russia's Svetlana Kuznetsova beat Poland's Agnieszka Radwanska:)

I am not doing hockey voiceovers this season for the KHL (Kontinental Hockey League) in Russia BUT the KIJHL's Kelowna Chiefs.

Hear my heart and voice get excited about the upcoming season here!

The first home game is on September 17 and I am looking forward to handling the public address duties for the Chiefs. 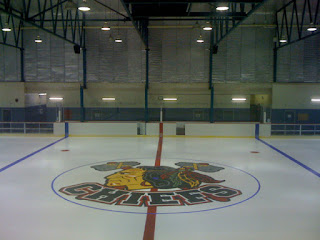 The Spokane Chiefs will be hosting the Western Hockey League's first outdoor Hockey Classic on Saturday, January 15th, 2011 at Avista Stadium against the Kootenay Ice. Five weeks after that, the Calgary Hitmen will host the Regina Pats on February 21st at McMahon Stadium.
A day earlier, the big boys (Calgary Flames and Montreal Canadiens) will take part in the 2011 Heritage Classic. It will be playoff time then for the Kelowna Chiefs - or maybe there is a hockey road trip in my future?
Posted by Ralph Michael Hass at 3:46 pm