Hockey Hibernation is over!

H2O for short:) Yes, water has turned to ICE as the Buffalo Sabres got the second short-handed goal of the season from Thomas Vanek tonight as they beat the previously unbeaten New York Rangers 3-1. Buffalo now has a perfect 3-0 record while the Rangers fall to 5 wins and 1 loss. Congratulations to coach Lindy Ruff who became the 23rd bench
boss to reach 400 career victories!

Next up for the Sabres in two days is my second favorite team - the Vancouver Canucks. My second-ever blog post mentioned how both these teams entered the NHL at the same time in 1970. I also talked
about a client in Sioux Falls, South Dakota in that post - and I just noticed Thomas Vanek played some of his early hockey for the Sioux Falls Stampede in the United States Hockey League.

I am disappointed the Sabres are NOT in Vancouver to play on Friday.
That would have been a real possibility to attend. Instead, the game is
in Buffalo, where the Sabres won early last year (January 19/07) in a shootout, 4-3. Here is my opener from that game on MSG-TV. Bit of a blooper if you ask me...watch to the end to see what I mean. The Hockey News Yearbook predicted both Buffalo and Vancouver to finish 11th out of 15 teams in the Eastern and Western conferences respectively. Based on what I have seen so far this season (and an undefeated pre-season for the Canucks), I am betting both these teams will finish top 8. That means playoff spots - just like the Buffalo Bills are aspiring to. They are currently
4-1. A great football movie has hit theatres now. Go see this: 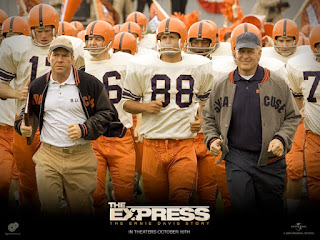