Happy July 4th!
On this date in 1776, the USA claimed its independence from Britain and Democracy was born. Every day thousands leave their homeland to come to the "land of the free and the home of the brave" so they can begin their American Dream.
My 16-year-old daughter, Ashley, flew into Reno last Saturday morning with her volleyball team to begin a week-long adventure across the border that will leave her with memories for a lifetime. You can view many photos here.
July 1st is Canada Day
It used to be known as Dominion Day, the First of July, Confederation Day and July the First. Canada wasn't born on July 1st, but the holiday celebrates the events that took place on this day. On July 1, 1867, the British North America Act created the Canadian federal government. This Act stated that Canada would become an independent dominion (territory) of England, which is why Canada Day was originally called Dominion Day until 1982.

On July 3rd, Dainius Zubrus got rich with a six year, $20.4-million contract in New Jersey. He only played 19 games with Buffalo last year after coming over from Washington.

The Sabres WILL survive! Keep the faith!

By the way, here is what Briere, Drury and Zubrus will look like after their new contracts finish: 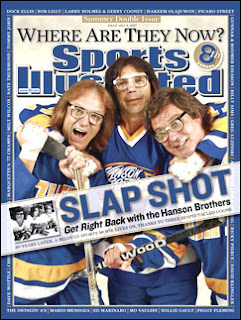